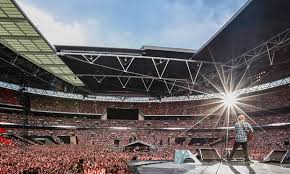 Expanded definition of what actually makes a song GREAT – Part 10

The trick as a performer
The trick for you as a performer is where you are actually putting your attention, whether it’s in your body, just around it, or, intending way out from your body, which is what you want to aim for.

Putting your attention on people and things in a wider and wider area, increases your willingness to communicate to more and more people, and gives you and your audience the distinct feeling of more space      • as demonstrated by these performers.

Even though the sound system is helping project the singer’s voice out to the audience, if you look carefully you may notice the singer is consciously intending his voice way out there to the far reaches of the audience, and they feel it.  He means what he sings. The rest of his band are also doing similar.

Successful performers seem to do the above intuitively, simply because they want to communicate with everyone in their audience, or because they realized the benefits of doing that intensity of connection over time.

Keep in mind though, as you extend your attention further and further out to your audience it takes practice so you don’t get stuck anywhere while doing it. It’s a spiritual type of exercise that results in everyone in your audience feeling you are performing just for them.

A song is really just a communication from a songwriter/performer to a listener.
When an eager audience perceives or feels a performer’s attention on them or around them, and they like the song, their natural response is to join in with the performer, because they feel inspired to do so. Sometimes those roles get reversed and you get • this happening.
______

The thrill of performing to large audiences
Ask any performer who has performed in the above mentioned way in front of large eager audiences that liked their song, what it was like, and they’ll probably tell you about an amazing level of spiritual communication they experienced between them and the audience, like • at this performance.

If you can achieve that live spiritual presence while recording in a studio, your listeners will “feel” you when they listen to your recording, just like in a live performance.
Finding a very high resolution photo of a large and lively audience, and blowing it up to several feet high and wide, then placing it on the wall of your recording studio, could help give you that live performance feel. You could probably think of your own way to do that too.
______