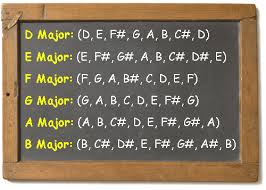 Keys and Scales
There are 12 keys to choose from using the 12 notes of an octave.

• Here is some more info on keys & scales

• Listen to the different scales and modes

One way you could describe scales could be as simply variations of the uniform note sequences of keys so as to give different patterns of sounds.

Whether keys were invented first, or scales, the bottom line is they are each made of sequences of notes that are used to make different musical sounds.

Keys and scales have different names so musicians can know the type of sounds the composer intends for the song. They also let each musician know by verbal or written instructions which key and scale each is playing or going to play, so there is prediction, coordination and creativity between them.

Assuming that simple viewpoint may make it easier to understand what can be a very vast subject.

“Mix and match” till your heart’s content. If you like the sound of a certain key and scale then use them to compose a song.

The internet has various free online apps that allow you to hear all the different keys and scales.

The one thing that makes keys and scales unique to themselves is the sequence of notes played in them. Each key and scale has a different sequence or order of notes played. The distance between the notes in a key or a scale is called an interval. Change the interval and you have different sounds. • Here’s more info on intervals.
______