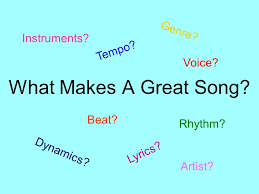 Choosing your song ingredients
You are now going to review each point of • What a Great Song is actually made of.

You are going to decide which of the ingredients you feel should be included in your composing of a Great Song, and incorporate them in your Songwriting Code.

Ponder the • first ingredient as though you have never read it before, and determine if you see it could benefit your songwriting in some way. If so, include it in your Songwriting Code in a way that is simply stated and direct and worded for your use specifically. You may want to blend it in with a part of your code you have already written, or state it all by itself. Up to you.

You’ll want to to work it over, back and forth, back and forth, until you are totally satisfied you have made it your own and your wording of it instantly motivates you to include it as part of your composing your song the way you want.

Do the same with the rest of the ingredients • on the list until you are satisfied you have included everything you want in a song you are composing.

♦ Now that you have completed that, newly go over your whole Songwriting Code as though you have never read it before, and add, remove, or refine anything in it you now see is needed.
______